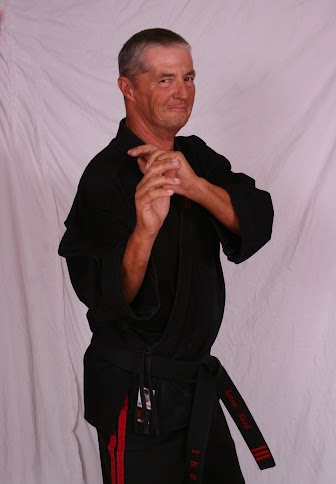 I have always had a passion for karate since the early 70’s, but there were not many schools at that time. In the late 80’s I found a school that trained in Isshin Ryu karate, but due to my job and other obligations I was not able to pursue the Martial Arts. In 1995 at a karate demonstration in Attica NY, I met Sensei Elwin Roberts who taught Isshin Ryu, I trained under Sensei Roberts to the rank of green belt until 1997 when the school closed. While in search of another school I met Sensei Robert Koch, and was introduced to Ed Parker American Kenpo Karate, Sensei Kochs speed, power, and flexibility were just amazing after coming from a more rigid style. I trained vigorously under Sensei Koch for 3.5 years and achieved my 1st degree Black Belt, within that time I became a Junior Instructor, a senior instructor, and finally a Sensei.

My daughter also joined International Black Belt Academy and trained with me, its fun to work with family and it brings you closer, she received her Black Belt in 2002, and is now proudly serving her country in the United States Marine Corp.

I started karate at age 44 for exercise not knowing it would take me in the direction of an instructor, it is still a great form of exercise, but much, much more, it’s a way of life. Karate is for everybody at any age, join us and bring the family.