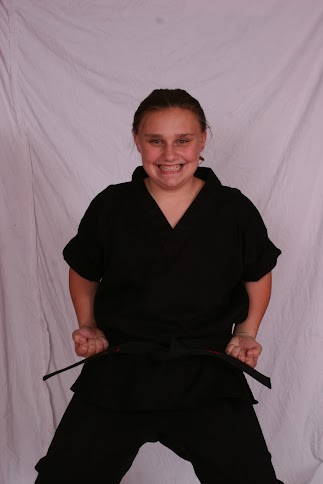 I began my training with IBBA on September 22, 2005. I was seven years old when I began. My brother and my sister each had a different type of sport to call their own, but what was mine going to be? I thought and thought for a while, until I passed the Karate School and from that point forward, I knew I wanted to do Kenpo Karate.

I know I will always stick with Karate. I have come to know that if you put in as much as you can, you will get that, if not more out. I have wanted to be an instructor my whole life, and when I had to write my letter as to why I wanted to be in the Black Belt Club, I showed how I wanted to be an instructor about forty times by saying that over and over. Karate is my passion, and people say it is not a sport, but a sport is a activity you dedicate you life to, which I believe I do. I teach now and even though I may seem to just be making those kids laugh, I am giving them the greatest gift of all, a sport they can do their whole life and the passion for it.

The students I have mean everything to me. If I don’t put a smile on their face when they walk out the door to go home, I haven’t accomplished the goal I always want to do, be an instructor that students can always get help from, and an instructor I can be proud to be. Also, when they come to karate, I hope I can make them, and their loved ones safe knowing they can protect themselves.

I am currently still in school, and I plan to do the one thing I love my whole life,  Kenpo Karate at International Black Belt Academy.